The Supreme Court on Monday declined to block the execution of John A. Muhammad, the sniper who terrorized the Washington area seven years ago. The step cleared the way for Mr. Muhammad to be put to death on Tuesday unless Gov. Tim Kaine of Virginia intervenes. 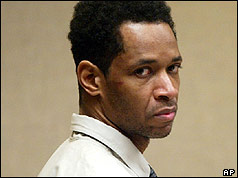 The court did not comment in refusing to hear Mr. Muhammad’s appeal, but three justices objected to the relative haste accompanying the execution.

Justice John Paul Stevens complained that “under our normal practice,” Mr. Muhammad’s petition for the court to take his case would have been discussed at the justices’ conference scheduled for Nov. 24. But because Virginia scheduled the execution for Tuesday, the judicial process was rushed, Justice Stevens said in a statement joined by Justices Ruth Bader Ginsburg and Sonia Sotomayor.

Justice Stevens wrote that, having reviewed Mr. Muhammad’s argument, he did not disagree with the majority’s decision to decline the case. Nevertheless, he said, because the court declined to stay the execution, “we have allowed Virginia to truncate our deliberative process on a matter — involving a death row inmate — that demands the most careful attention.”

The United States Court of Appeals for the Fourth Circuit, in Richmond, Va., upheld the death sentence three months ago. In rejecting Mr. Muhammad’s appeal, that federal panel said it was “unable to find reversible error in the conclusions of the state and district courts.”

Unless Mr. Kaine stops the execution, Mr. Muhammad, 48, will be given a lethal injection on Tuesday night for the killing of Dean H. Meyers, an engineer who was shot in the head at a gas station in Manassas, Va.

Mr. Meyers was one of 10 people killed in a three-week shooting spree in Maryland, Virginia and Washington, D.C., in October 2002. Mr. Muhammad’s accomplice, Lee B. Malvo, who was 17 at the time, was sentenced to life in prison without parole. The two are also suspected of fatal shootings in Alabama, Arizona and Louisiana.

Mr. Kaine has promised to review Mr. Muhammad’s request, but has signaled that he is not inclined to intervene. “I know of nothing in this case now that would suggest that there is any credible claim of innocence or that there was anything procedurally wrong with the prosecution,” Mr. Kaine said several weeks ago during his monthly call-in radio show.

The governor has said that he is personally opposed to the death penalty, but he has allowed a number of executions to take place since he took office in 2006. Virginia has the nation’s second-busiest death chamber behind Texas.

Mr. Muhammad’s lawyer, Jonathan Sheldon, has maintained that his client, a Persian Gulf war veteran, was affected by his combat experiences.

“Virginia will execute a severely mentally ill man, who also suffered from Gulf War syndrome, the day before Veterans Day,” the lawyer said in an interview with The Associated Press.

Although the three justices’ complaints about the haste of the proceedings in Virginia might seem puzzling, given that the killings took place seven years ago, it is common to take years for a death-row inmate to exhaust all appeals in the state and federal courts. In fact, after the Fourth Circuit ruled against Mr. Muhammad in August, Mr. Sheldon said Virginia had the shortest average time from conviction to execution of any state: about 6 years, compared with 12 years in Texas and 18 years in California.

Although 6 of the 10 sniper killings of October 2002 took place in Maryland’s Montgomery County, the United States attorney general at the time, John Ashcroft, decided that Mr. Muhammad and Mr. Malvo would be prosecuted in Virginia because it imposes the death penalty far more often than Maryland does. The trial was conducted in Virginia Beach, Va., far from were the shootings took place.

The jurors who convicted Mr. Muhammad in November 2003 cited the defendant’s apparent lack of remorse in deciding to impose the death penalty.