Pininfarina at the 2010 Geneva Motor Show, the first official image of the concept car – On the cusp of celebrating it’s 80th anniversary, Pininfarina has released a sketch of its latest concept vehicle. Set to be revealed at the forthcoming Geneva motor show, the new car has been built on an Alfa Romeo platform – an homage to the company on its 100th birthday.

According to the famed coachbuilder, the new concept is meant to be part of the tradition of successful Spiders born from Pininfarina’s relationship with Alfa Romeo, which has been among the most significant and long-lasting partnerships in automotive history. 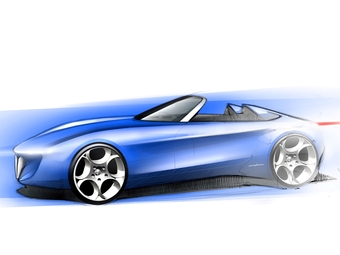 The company claims that the concept is an innovative vision of the classic two-seat Spider – a historic theme strongly present in Pininfarina’s roots.

We’ll bring you more information and our own unique photos when we see the showcar in the metal in March.

A 2-seater spider on Alfa Romeo basis, which will be unveiled on March 2nd at the Pininfarina stand, thus starting the celebrations for the 80th anniversary

The Pininfarina new concept is meant to be part of the tradition of successful spiders born from the relationship with Alfa Romeo, among the most significant and long-lasting ones in the automobile history, and interprets the innovative vision of an antique theme strongly present in the Pininfarina roots, the 2-seater spider.

An iconic object that, binding with an ideal thread the past and the future of Pininfarina, starts the celebrations for its 80th anniversary, representing at the same time an homage to the Alfa Romeo 100th birthday.