Winter storm hits mid-South hard – A storm has barreled into the Southeast and sections of the Northeast, coating power lines and roads with ice and leaving thousands without power.
More heavy snow was predicted for Mid-Atlantic cities, some of which already have record amounts, the National Weather Service said Saturday.
Asheville, North Carolina, recorded 11 inches of snow on Friday.
The weather service said less than a half-inch of snow should fall during the day, turning to freezing drizzle at night. There was an ice storm warning for the Carolinas until midnight. 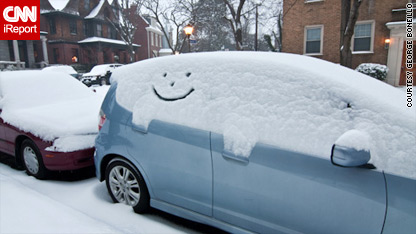 “Ice accumulations of one-quarter to one-half inch are expected,” forecasters said. “Elevated surfaces such as trees, power lines and highway bridges and overpasses will accumulate ice most easily.”
North Carolina’s Department of Transportation asked motorists to avoid all unnecessary travel.
The town of Cary, North Carolina, canceled its Winter Wonderland festival because of the storm.
A foot of snow was expected in parts of Virginia, where iReporter William Bernstein, Jr. said people are “just not used to this.”
A typical snowstorm in Virginia Beach, located about 20 minutes from Norfolk, usually yields about 4 to 5 inches of snow, Bernstein said. But by 8 a.m., snowfall had well surpassed the norm.
“Nobody is really out on the roads,” he said. “They’ve closed off ramps and on ramps in downtown Norfolk.”
See pictures from Virginia Beach on iReport.com
Washington and Baltimore, Maryland, were expected to get 4 to 6 inches of snow. Motorists were being warned to stay off the roadways, D.C. officials said.
Forecasters warned that gusty winds in several states may topple ice laden trees and power lines.
A Home Depot store in Spartanburg, South Carolina, saw a run on generators, fire logs and ice-melting chemicals Friday, and Spartanburg County called in extra dispatchers to handle emergency calls, CNN affiliate WYFF reported.
Watch the snow pile up in Tennessee
Several inches of sleet covered the ground in the town of Travelers Rest, South Carolina, WYFF’s Sean Muserallo reported.
Brian Wood of Marietta, South Carolina, told WYFF his car was “fish-tailing all the way” as he drove to work at a restaurant Saturday morning. “It’s definitely not driving weather.”
Tennessee’s Transportation Department said highways statewide had patches of snow and ice, and trucks were spreading salt on roads across much of the eastern part of the state.
How’s the weather where you are? Send photos, video
The storm moved north and east Friday from the Southern Plains of Oklahoma and Texas. Oklahoma City was coated with ice and shivering with a daytime high of 20 degrees, said CNN meteorologist Karen Maginnis. In Dallas, Texas, it was 26 degrees.
Oklahoma’s Corporation Commission said Saturday that more than 108,000 homes and businesses were without power. Gov. Brad Henry had declared a state of emergency on Wednesday, ahead of the storm.
President Obama signed a disaster declaration for Oklahoma on Saturday, authorizing federal aid to the hard-hit state.
In northern Georgia on Saturday, about 1,200 customers were without power, down from 5,000 earlier in the day, the Electric Membership Cooperatives said in a written statement. They said the outages were caused by trees falling on power lines, and that power should be restored by late afternoon.
School systems and communities in northeastern Georgia also canceled numerous weekend activities, CNN affiliate WNEG reported.
Some are determined not to let the weather keep them indoors. iReporter Katy Hawkins of Norman, Oklahoma, said she and her roommate went outside to play in the snow after spending most of the day inside.
“Oklahoma does not usually get enough snow to make a snowball, but yesterday we had at least 7 inches in the Norman area,” she said.
In her apartment complex’s parking lot, most cars had at least a half-inch of ice encasing the whole car and then snow on top of that, she said.
“I spent 30 minutes trying to pry my door open and finally just gave up and went to take pictures instead!”