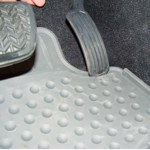 Toyota Recall: List of models affected by floor mats issue : are finally taking action against the number of complaints over floormat issues with certain models, by announcing a recall of 3.8 million vehicles.

As reported from AutoBlog, this is by far the biggest recall that the auto giant has had to make in the U.S. The news comes after the National Highway Traffic and Safety Administration issued a statement to all owners of Toyota and Lexus models from 2004-2010, informing you that you may need to send your vehicle in for recall.

The issue at hand here, which a lot of you already know about, is all to do with the floormats on some of the Toyota models. As you can see in the image above, the problem can cause the accelerator pedal to get stuck in a wide open throttle position and wedge itself against the floormat – which is obviously a major safety issue.

If you own one of the listed models above, we would advise you to head over to AutoBlog here, for the full press statement, where’ll you’ll find more information on what to do.