Germany goalkeeper Robert Enke dies at age 32 : FRANKFURT — A goalkeeper expected to play for Germany at the World Cup died after being hit by a train in what 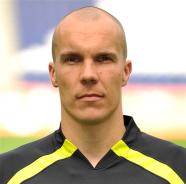 police suspect is a suicide. He was 32.

Robert Enke played for the German club Hannover. Team president Martin Kind confirmed his death, and German police later released a statement saying a man had been fatally injured after being struck by a train Tuesday night.

The statement said the victim was “apparently national team goalkeeper Robert Enke” and “first police indications are that it was a suicide.”

“You expect many things, but not something like that,” Kind said. “I do not know how and why it happened, but I do not think that it had anything to do with football.”

The train crossing was not far from Enke’s Hannover home and his car was found near the scene, police said. Hundreds of fans lit candles and placed flowers outside the Hannover stadium on Tuesday night.

Enke had been diagnosed with a bacterial stomach ailment and missed nine weeks before returning 11 days ago and playing two Bundesliga games.

He had not been selected for Germany’s exhibition games against Chile on Saturday and Ivory Coast on Wednesday. But coach Joachim Loew had said Enke remained the leading candidate to be Germany’s goalie at next year’s World Cup in South Africa.

Enke and his wife lost their 2-year-old daughter to a heart ailment in 2006. The couple adopted a girl in May, who is now 8 months old.

“We are all shocked. We can’t find the words,” national team manager Oliver Bierhoff said from Bonn, where the national team assembled.

Enke played eight matches for Germany, making his debut in a 1-0 loss to Denmark in 2007. His last international game was a 2-0 win over Azerbaijan on Aug. 12.

After Jens Lehmann retired following the European Championship in 2008, Enke was promoted to No. 1 for Germany, but was set back by a broken hand.

Enke made 196 Bundesliga appearances and also played for Borussia Moenchengladbach after starting his career in East Germany at Jena. He also played for foreign clubs, among them CD Teneriffa, Fenerbahce, Barcelona and Benfica.